When you get out of college and start your new formulation job in the cosmetic industry, you will quickly learn that not much of what you learned in your Chemistry courses applies to cosmetic science or formulation. You’ll also discover that creating new cosmetic formulas can be challenging. But if you understand the basic steps to making a finished product, you’ll be well on your way to becoming a famous cosmetic chemist. 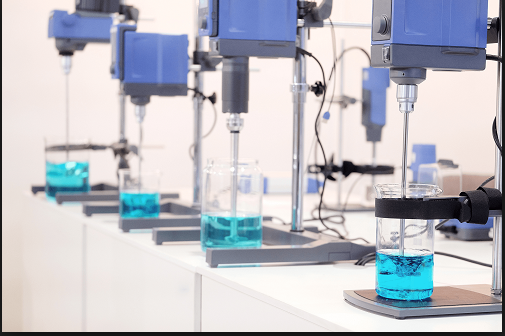 Before we go through the steps it’s important for you to realize that the cosmetic industry is run mostly by the Marketing and Sales department. When was working in Corporate America this used to bother me because the marketing folks never seemed to know what they were doing. Plus, the chemists actually make the product.  But what I learned is that when it comes to generating income, Marketing and Sales have a much greater impact that the people who actually produce the products.  From a corporation standpoint, it makes sense that they are put in charge.

Ok, here are the 7 basic steps of making cosmetic formulations.

Since Marketing is in charge, the first thing that happens before you make a cosmetic formula is that they find a winning product concept. Concepts are just ideas described on paper that is shown to consumers. The ideas that consumers like the best are the products that will eventually get launched.  Of course, this is not an exact science and sometimes the products that get launched are the ones that the president of marketing or the company likes best.  But mostly, it is consumers that direct marketing as to which concepts are the most promising.

After a few rounds of market research testing and refining, the concepts then go to R&D to get turned into actual product.

For the most part, winning concepts are minor iterations on products that have already been successful. This is because consumers have a difficult time envisioning things that don’t already exist.  That’s also why cosmetic products haven’t changed much in the last 30 to 40 years. People basically want what already exists…just different.

But from a formulator’s perspective this makes the job easier. Rather than starting completely from scratch, you can go to your company’s in house formulations, a supplier’s formulary or one of the many formulation books to get a starting formula that meets most of the parameters for the concept.

For example, when I was formulating products for Tresemme, the winning new product concepts were always some new shampoo and conditioner that provided a specific benefit or had a special new ingredient.  That allowed us to take the current formulas, make minor changes, and call it a whole new product. And it worked. In the last 15 years the brand has gone from $50 million a year in sales to over $600 million.

So, the first step in creating a cosmetic formula is to get a starting formula. This will speed your development time as you’ll have higher confidence that the product will perform, be stable and safe. If you don’t have in-house formulas, here’s a source for good cosmetic starting formulas.

After getting your formula put it in a formulating spreadsheet.  Then go out and get your raw materials. If you are at a big corporation you’ll have supplier sales people calling on you and you can get samples pretty easily. Or you’ll probably have the raw materials already in inventory at your company. Use the spreadsheet to calculate how much of the raw materials you’ll need and get at least ten times that amount. When you’re making prototypes you’ll need a lot of materials for optimization.  To find raw material suppliers in the cosmetic industry a website like Prospector is great.

Of course, that basic procedure will vary widely depending on what exactly is in the formulation.

When you’ve finished your batch, test for standard quality control measures. For most personal care products this includes the pH and viscosity. You’ll also do a color check and an odor check.  If these basic characteristics are off a little bit you can usually adjust the batch until it comes within specifications.

After letting the batch equilibrate over night, run some performance tests to see if the prototype performs as well as it should. Usually you’ll have some standard tests you run and a benchmark to which you compare it.

Incidentally, making prototype batches of 400 - 500g is usually the best balance of adequate size versus chemical waste.  Smaller batches than that are difficult to produce accurately and bigger batches are just wasted material.

If the product doesn’t meet your concept performance requirements, you’ll have to make some refinements to ingredient levels or to the ingredients you’ve used. The specific changes you make depends on the shortcoming of the specific prototype.  This can be a long process. I once tested a few hundred prototypes when I was trying to make an improved shampoo.

When refining your prototypes make sure you change a minimum number of variables and make the changes significant.  That means removing an ingredient entirely, cutting the level in half or even doubling the level.  You want to see big differences between your first prototype and your second.  That way you’ll know better how to adjust your third prototype.

Once you have a prototype that is adjusted to the performance levels you want, you’ll have to do more formal testing like stability testing, consumer testing and safety testing. But assuming that these all get acceptable results, you’ll finalize your formula for that the lab and move it to the next phase of production. For big companies this would be a pilot plant trial, maybe a consumer home use test, and then a full production run.  In small companies you might move right to the production run.

And that is pretty much the whole process. During your job as a formulation chemist you’ll spend more time on some of these steps than others.  Steps 5 and 6 will take the bulk of your time but prior to the creation of a winning concept, you’ll spend much more time with marketing making sure they don’t create a winning concept that isn’t scientifically possible.

Interested in learning how to formulate cosmetics? Take a look at our course Practical Cosmetic Formulating

Review of the 10 most important science topics every cosmetic chemist needs to know to work successfully in the cosmetic industry. These are also frequently ignored in college chemistry courses.