I saw that Colin over at Colins Beauty Pages had tweeted that he was watching an old episode of Columbo in which Martin Sheen played an evil cosmetic chemist.  That got me thinking about other fictional cosmetic chemists.  Here are a couple that I was able to come up with.  You have any others? 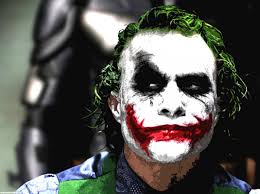 1.  The Joker -  Perhaps the most evil cosmetic chemist ever.  He specializes in making color cosmetics that contort the face of the wearer creating a huge grin and also killing them.

2.  Poison Ivy - It’s strange that the Batman comic features a couple of evil cosmetic chemist characters.  Poison Ivy is more of an eco terrorist, but her main weapons of choice are pheromone-containing fragrances that control people’s minds.  You’d have to be quite a cosmetic chemist to pull this off.

3.  The Flash - Barry Allen was a chemist who wasn’t following proper safety precautions when he got zapped by lightning in the lab and was turned into the Flash.  I couldn’t find any instance of him making a cosmetic but I’m still searching.

4.  Dr Bunsen Honeydew - The famous scientist and inventor from the Muppets is known to have created a hair growing tonic.  I know lots of cosmetic chemists are working on that.

5.  Peter Parker - You know, Spiderman.  He’s a polymer chemist who was bright enough to come up with the formula for webbing.  He must have made some cosmetic potions over the years in the comics.  Any Spiderman geeks out there able to confirm?

6.  Simon Drudd - He was a chemist in the Marvel Universe who endeavored to make a youth serum to reverse the aging process.  While he was able to create the youth serum he couldn’t control the effects and eventually reverted to a child, baby and eventually out of existence.  A cautionary tale for all you anti-aging cosmetic chemists out there.

7. Lillian vo Loont -  More of an alchemist but she was able to create a formula that could give people perfect skin.  Unfortunately, the process turned the wearer into a gold coated statue.

Got any more fictional chemists who could vaguely be considered cosmetic chemists?  Leave a message in the comments below.

It’s easy to find people claiming on the Internet that natural cosmetics or natural skin care is better than synthetics. These claims are inherently believable…

There has been much written about the benefits of herbal and plant extracts in cosmetic products. You can find entire books like this one and…