What Kinds of Surfactants Are Used in Cosmetics?

If you haven’t done so yet, you might want to review part 1 of this surfactant series to learn what surfactants are and when you might use them.

There are thousands of different types of surfactants and it can be difficult to know which to use for any specific application. This task is made easier by knowing how surfactants are classified.

Surfactants can be grouped by the charge characteristic of their polar 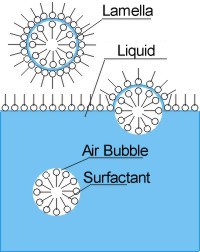 We’ll discuss each of these next.

Anionic surfactants are those that have a negative charge on their polar head group. They include groups like carboxylic acids, sulfates, sulfonic acids, and phosphoric acid derivatives, of which the first three are most important in cosmetics. They are most useful for applications that require good cleansing and foam.

Sulfates are the next most commonly used anionics. They include synthetic detergents like sodium lauryl sulfate (SLS), ammonium lauryl sulfate (ALS), or their ethoxylated companions, sodium laureth sulfate (SLES). They are excellent foamers, cleansing agents, and are relatively inexpensive. The drawback is that they can be irritating and some consumers find them troubling. In fact, sulfates are some of the most highly vilified cosmetic raw materials but we’ll save that discussion for another time.

Sulfonic acid surfactants are generally more mild than sulfates. They include Taurates (derived from taurine), Isethionates (derived from isethionic acid), Olefin sulfonates, and Sulfosuccinates. The reason they are not used more often is that they are more expensive to produce and do not provide a significant enough benefit over Sulfates.

Cationic surfactants are those that have a positive charge on their polar head group. They are most useful for conditioning cosmetics. They include chemical classes such as Amines, Alkylimidazolines, Alkoxylated Amines, and Quaternized Ammonium Compounds (or Quats).

By far the most significant cationic surfactants used in cosmetics are Quats. These are nitrogen-containing compounds that acquire a positive charge when dispersed in solution. This positive charge makes them electrostatically attracted to the negative (damaged) sites on hair and skin protein which makes them resist rinse-off. Quats like Cetrimonium chloride and Stearalkonium Chloride provide the basis for numerous hair conditioners.

The biggest challenge of working with cationics is that they are not typically compatible with anionic surfactants. This means it is difficult to produce products that simultaneously clean and condition using only surfactants. Cationic surfactants can also be irritating so this must be considered when formulating cosmetics with them.

Some surfactants have the potential to have both positive and negative charges depending on the environment they are placed. This characteristic is termed “zwitterionic” and surfactants of this type are called amphoterics. Examples include Sodium Lauriminodipropionate and Disodium Lauroamphodiacetate.

Amphoterics are primarily used in cosmetics as secondary surfactants. They can help boost foam, improve conditioning and even reduce irritation. They are also used for baby shampoos and other cleansing products that require mildness. The drawbacks are that they do not have good cleansing properties and don’t function well as emulsifiers.

The last class of surfactants we’ll cover are the ones that contain no specific charge. These are termed non-ionic surfactants and are used most often as emulsifiers, conditioning ingredients, and solubilizing agents. There is no other type of surfactant that is used more frequently than nonionic surfactants. The primary nonionics used for cosmetics include alcohols, alkanolamides, esters, and amine oxides.

Alcohols such as Cetyl or Stearyl alcohol are used in creams and lotions to provide body and feel to the formulas. They also help stabilize the emulsions and can reduce irritation. Amine oxides like Cocamidopropylamine oxide are used to boost foam in cleansing products. A number of esters are used to provide conditioning, slip and shine to biological surfaces. Polysorbate esters are also excellent solubilizing ingredients for fragrances and other botanical oils.

Most of your formulating time will be spent working with different levels of surfactants and trying to pick out just the right one for your application. This brief overview provides all the basics that you need to know to get started (and to impress Marketing people with your knowledge), but it is only the start. You need to work with surfactants, talk with your surfactant suppliers and experiment with different blends. Only then will you get a better understanding of these molecules and what you can do with them.

Do you have more questions about surfactants? Leave a comment below.