What is an emulsion? Back to Basics

You may have heard the term emulsion, but still don’t quite understand what it means, especially if you are not a chemist. Well, I thought we go back to basics and take a simple look at emulsions.  What are they and why should a cosmetic formulator care? 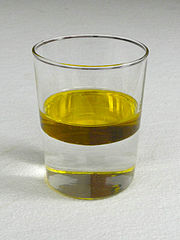 In the most basic sense, emulsions are mixtures of liquid materials that are not normally compatible. And when I say “not compatible” I mean that when you put these materials together they don’t combine to form a single, uniform solution. Instead, they form separate layers. The most common examples are mixing oil with water.

In an emulsion, these materials that normally create separate layers get blended together so they appear to be a single, uniform solution. This happens because another material called an emulsifier is added to the mixture.

To understand emulsions you have to know something about the chemistry of molecules and liquids. Despite what some misleading natural marketers & scaremongers try to say, all materials are chemicals. And all chemicals are made up of molecules.

Non-polar molecules include things like oils, waxes, and esters.

Polar molecules include things like water, alcohol, and salt.

If the world contained only polar and non-polar materials it would be a lot less interesting and life would have had a hard time getting started. But despite our simple description polarity is not like an on/off light switch. All materials exist on a polarity range with some things being completely polar and others being completely non-polar.  But there are some materials in the middle of that scale and these are the ones that make emulsions possible. These are called surfactants.

So, those are the three basic materials you need to know about to understand emulsions. But you might still be wondering why a formulator would care about any of this.

It turns out that many of the best ingredients for providing important cosmetic benefits like moisturizing and conditioning are non-polar. Things like mineral oil, coconut oil, waxes, petrolatum, and the like are all non-polar.  Now, we could just make cosmetics blending non-polar materials together and there are many of those. This would be things like body butters and salves. 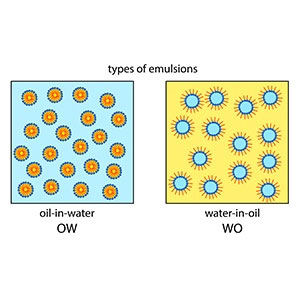 The problem is that these products are usually too greasy, sticky and otherwise not aesthetically pleasing. A little oil on your skin or hair is nice. Too much oil and you can never get it out.

Polar materials don’t feel greasy and they can provide some nice cosmetic benefits too like cooling, some moisturizing, and cleaning. Some people find bathing in salt water soothing.  But there are significant limitations to what polar materials can do on their own.

For most cosmetics consumers want the benefits of both non-polar and polar materials but don’t want the negatives.  This is where emulsions come in.

When you create a cosmetic that has both polar ingredients and non-polar ingredients you must add a special kind of surfactant, called an emulsifier, to your mixture. When you pick the right emulsifier, part of it will get incorporated into the oily (non-polar) materials and the other part will blend with the watery (polar) materials.  Emulsions are blends of oils and water.

To get the mixture to blend thoroughly you have to mix it with a high level of force. In an oil in water emulsion the vigorous mixing creates tiny particles of oil that remain suspended. The smaller the particles you can make the more stable the mixture will remain.

This idea of stability is an important one. By stability I mean the tendency for the small oil particles to stay suspended in the solution. Over time what happens is that the oil particles will bump into each other and combine. Since non-polar materials would rather associate with other non-polar molecules when they meet other ones they do that.  Eventually, all the particles combine and you get a separation of the emulsion. However, if you pick the right emulsifier and you’ve made the particles small enough the emulsion will be used up before it ever gets a chance to separate.

Creating cosmetics requires a formulator to learn about the science of emulsions and how to create mixtures of materials that are not normally compatible.  As a formulator you will spend much of your time searching for the right oil phase to give you the benefits you want and the emulsifier that will keep that oil phase blended with the water phase.  Remember, if you put together an emulsion and it separates that means you either picked the wrong emulsifier for your oil phase, you didn’t use enough of the right emulsifier, or you didn’t blend the mixer with enough energy to create particles that were small enough.

Want to learn how to make emulsions and other types of cosmetic products? Join our course Practical Cosmetic Formulating.