Whenever we do a webinar, we find that about 30 - 40% of people interested in formulating cosmetics don’t have a background in science.  In fact, most home formulators have very little chemistry training. While having a degree in chemistry is not required to be an excellent formulator, there are some chemistry concepts that can make your formulating efforts much easier.

In this post, we’ll remind you of some basic concepts in chemistry that will make formulating easier for you even if you don’t have a chemistry degree. Now much of this information you probably learned in grade school or high school, but if you haven’t thought about these things in many years, this refresher should help.

The main chemistry concepts every formulator should know include…

If you really want to know about chemistry you have to start with elements and the periodic table. It’s one of the greatest inventions in the history of humanity.  There is a ton of worldly information packed into this simple chart. Most of it isn’t directly relevant to formulating, but some of it is.

Everything that is matter is made up of chemical elements on this table. Everything you’ve ever touched, eaten, worn, lived in, or put on your body is composed of these chemical elements. A single unit of these elements is an atom. You are composed of these atoms. It frequently amuses me when I see advertisers claim that they have a product that is “chemical free”. This is wrong. Unless they are selling you something made of electricity, magnetism or gravity, they are selling you a chemical. Water is a chemical.

Pretty much anything you can touch is a chemical.

These atoms are made up of smaller particles called neutrons, protons, and electrons and it is the different number of those that give the elements their particular properties. Neutrons and protons exist in the center of the atom called the nucleus. Electrons exist in the outer shell of the atom which has important implications for their ability to react. We’ll talk about this shortly. At room temperature some of the elements are solids and some are gases. A couple of elements including Mercury and Bromine are liquid at room temperature.

The periodic table lists all of the known elements in a nice simple chart. You will no doubt have heard of many such as Carbon, Hydrogen, Oxygen, Gold, Silver, etc. The elements are arranged on the periodic table in terms of their mass. Mass is like weight, but it is not dependent on gravity like weight. Anyway, heavier elements have higher numbers and lighter ones have lower numbers. The lightest element in Hydrogen. In cosmetic formulating we primarily work with elements in the top 4 rows.

Atoms typically exist in a combined form called molecules. When an oxygen chemically bonds with two hydrogen atoms, we call the resulting chemical Water. The chemical and physical properties of a molecule depend on a number of things including

So how is this related to formulating?

Molecules make up every raw material you might use in formulating. Whether it is natural or synthetic everything is made up of chemical molecules. The periodic table helps you predict how the different raw materials might interact.

Another thing to know about cosmetic raw materials, they are made up of numerous types of different molecules. A sample of water will contain, in addition to Hydrogen and Oxygen, things like Iron, Copper, Sodium, Chlorine, and any other molecule that might have dissolved in it. This is why raw materials from different sources might not work exactly the same in your formula despite having the same name.

Phases of matter relates to the physical condition of a raw material. The three main phases include solid, liquid and gas. In formulating, you will primarily be dealing with either solids or liquids. Of course, there are also materials like butters or polymers which are such thick liquids they behave like solids.

The exact phase that a material takes on depends on the environmental temperature and pressure. These are dictated by the laws of thermodynamics. The most relevant part of this concept for formulators is the melting / freezing point.  This is the temperature at which a solid becomes a liquid or visa versa. When making a formula you often have to heat up a solid material so that it becomes a liquid that can be incorporated into the system.

One of the biggest differences between formulating and college chemistry is that when you were in college you spent a lot of time combining substances and hoping you would see some kind of chemical reaction. In this way, you turn one substance into another. However, as a formulator you put chemicals together and you don’t want them to react and form new substances. You typically want them to retain the properties they had by themselves.

Chemical reactions happen when one atom or molecule gets close enough to another atom or molecule to trade electrons. Depending on the nature of the substances they will react strongly, weakly or not at all. It is through chemical reactions that ingredient suppliers create compounds from starting materials to produce new raw materials for cosmetics. For example coconut oil will chemically react with sodium hydroxide to create soap. And you know soap has vastly different properties than both coconut oil and sodium hydroxide.

By knowing the properties of the raw materials you use in making cosmetics, you will be able to predict whether some type of chemical reaction might happen. For most of your formulas you will want no chemical reactions.

Most cosmetic formulas are combinations of multiple ingredients. When you put them together in the same container a few things can happen.

Powdered cosmetics are non-uniform mixtures. The solid particles are mixed together but are not evenly distributed (even though to your eyes they may appear to be). Your goal is to get them to mix together as evenly as possible but it is difficult with large sized particles.

Most cosmetics are near homogenous mixtures. Suspension is the term used to refer to solutions with large particles (bigger than 500nm). Some liquid foundations are an example of this. You have to shake it to get it to disperse evenly. When the particles are smaller say 2 – 500 nm, they create a colloid mixture. These particles are small enough that they don’t easily fall out of solution. Creams, also called emulsions, are examples of colloid mixtures. Making these stable is one of the most important tasks of the cosmetic formulator.

Solutions are mixtures with particle sizes smaller than 2 nm. There are some basic principles of solutions helpful to understand. First, there is the components of a solution.

When you put sugar in water, the water is the solvent and the sugar is the solute. The amount of sugar refers to the concentration.

pH of a system

Another important chemistry concept formulators encounter is pH. pH is simply a number that represents the concentration of the hydrogen ions in an aqueous (water) solution. If you were take the pH of pure water at 25C, the pH would be 7.0.

Some factors that affect the pH include the solution temperature and the other molecules in the solution. Pure water has a pH of about 7.0.  Adding an acid will reduce the pH. Adding a base or alkaline material, will increase the pH.

When making cosmetics, the pH is important for both helping determine the quality of the batch and for product functionality. Some products work better at a lower pH. For example, hair conditioners work better at a pH of between 4.0 – 5.0. Regular shampoos work better at a pH between 5.0 – 6.0. Some preservatives work at low pHs but not at higher pHs. Of course, it depends on the specific formulation, but this is why pH is an important concept.

Note that pH generally refers to aqueous solutions. Non-aqueous solutions or even solids do not have a pH. You may hear about the pH of skin or hair but these aren’t really referring to the actual pH of those surfaces. This refers to a related concept called the isoelectric point.

Viscosity – This term refers to the rheology or thickness of a material. In formulating we will use viscosity as a way to determine the final characteristics and quality of your finished formula. If the liquid can flow, then it will have some viscosity measurement.

Emulsion – a mixture of oil and water held together using emulsifiers. Emulsions are also called colloid mixtures. They are a common type of cosmetic formula form.

Polymers – Polymers are a special type of material made up repeating molecular units called monomers. They can be very large molecules.

Proteins – Proteins are made up of molecular units called amino acids. They are typically from a living material such as a plant or animal.

You can get a more complete review of chemistry by visiting the Khan Academy. 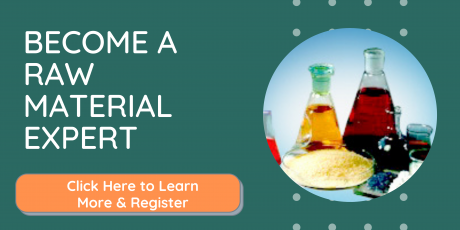 A list of over 100 cosmetic industry acronyms and their meaning. Essential knowledge for a cosmetic scientist.