Why the EWG Skin Deep Database is Still a Dubious Source

The EWG gets a lot of criticism for flaws in their database, but I have to give them credit where credit is due. They have fixed at least one flaw that I pointed out in a previous blog post 3 reasons why the (EWG is a dubious source). They used to have a listing for a fictional compound POLYPARABEN. Fortunately, they removed it. But they still list Polyparaben as a synonym for Propylparaben but that is a minor mistake. I find it encouraging that they have fixed anything. 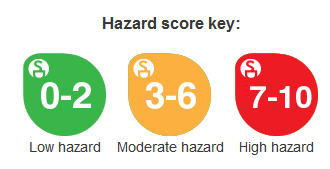 Unfortunately, the EWG seems more concerned about their Amazon Affiliate sales than they do about consumer safety. After all, why would they put an affiliate link to a product they rate as the worst of the worst?

Here is the Roc Retinol Moisturizer with a rating of 9. A 9 rating is one of the most dangerous product that can be found in the Skin Deep Database (according to them). But if you click on the picture they’ll be happy to have you buy the product through their affiliate program. If a product was this dangerous how could the EWG possibly encourage people to buy it?

Safety Ratings Based on Nothing

One of the “improvements” recently added to the Skin Deep Database was an additional rating of the quality of data supporting the safety rating. This is understandable since ratings based on single studies are much weaker than ratings based on lots of studies. However, this does not seem to affect the way they rate ingredients.

For example, how can an ingredient like HYDROGENATED PALM GLYCERIDES get a one rating? A one rating is the most safe you can score so they give it a one. They admit that this rating is based on no data. What is it based on? I have no idea.

Maybe they think Palm Glycerides sounds natural so it gets a one rating with no data, but then how would you explain the one rating based on no data of HYDROXYETHYL ACRYLATE/ SODIUM ACRYLOYLDIMETHYL TAURATE COPOLYMER? There is certainly nothing natural about an acrylic polymer.

You could say that one rating is the starting point so any ingredient that has a zero data will get a one rating. This seems rather silly but it would be logical. But I don’t think the assumption that an ingredient is completely safe without any supporting data is a reasonable one. It goes completely against the “Precautionary Principle” that the site is supposed to preach.

Anyone who knows chemistry knows that Sodium Cocoyl Sulfate is essentially the same thing as Sodium Lauryl Sulfate. Here’s a good explanation why.

So how is it that two chemicals which are essentially identical have different ratings? All the fair amount of data that is available for Sodium Lauryl Sulfate is equally applicable to Sodium Cocoyl Sulfate!

If any knowledgable chemist was involved in making the database, this problem of naivety could be avoided.

Benefits of the Skin Deep Database

There are some good things about the EWG Skin Deep Database. I do like that you can look up ingredients and compare them to different products on the market. This is quite handy for a formulator. And if a person is allergic to any specific ingredient it’s especially helpful to know what you can avoid.

However, the hazard ratings and collected science is mostly rubbish and not worth paying attention to. If you want a more reliable database consider looking at the Cosmetic Ingredient Review. This one is actually collated by toxicologists and other people with science backgrounds. And if you want one produced by the EU, this cosmetic ingredient database will be more helpful.