Is bacteria the next big thing in cosmetic ingredients?

Here’s a novel idea in cosmetic ingredients…bacteria. According to this report, scientists have found that they could improve the condition of skin by topically applying a bacteria that could metabolize ammonia. 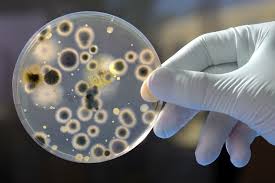 In the study they took an ammonia-oxidizing bacteria (Nitrosomonas eutropha) commonly found in soil and created a suspension for application to skin. They created a placebo suspension then got two groups of people to apply either product to their face and scalp for 3 weeks. The test group reported an improvement in their skin condition while the control group didn’t.

While this is a pretty interesting approach and suggests that more research is worthwhile, I’m a bit skeptical of results or even the approach. First, it doesn’t seem like there were any statistically significant improvements. Next, the results were all self-reported. Why wasn’t a dermatologist involved in evaluating the participants? Perhaps that would be the next step.

On the other hand, this would be a significant formulation challenge. How would you keep the microbial culture alive? And how would you prevent contamination by “bad” microbes? The preservatives we use today kill microbes indiscriminately.

Something to think about (along with other ideas for good microbes in cosmetics).