Last week was the annual Suppliers Day for the New York chapter of the SCC. It’s always a huge event and you can find thousands of raw materials from hundreds of different suppliers. And to convince you to try out their materials, cosmetic raw material suppliers employ marketers. You’ll get all kinds of promises what an ingredient can do but as a skeptical cosmetic chemist you won’t know what to believe. Here are a few of tips on how to evaluate cosmetic raw material marketing. 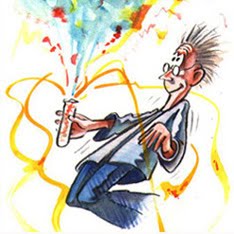 Are the claims supported with studies?

The first thing you should look for when presented with a new raw material is whether there have been any studies done at all. Is there any data for you to look at that supports the claims they are making about the new ingredient. Often, a raw material will be touted as better because of the source of its starting ingredients. Unless you are going for an all-natural or sustainability angle in your formulation, the source of the raw material shouldn’t matter much to you. But it’s crucial to know the claims made about the ingredient and the studies done to back them up.

Was the study size large enough?

Fortunately, most cosmetic raw material suppliers have done studies to support their claims. This is where you have to be a curious chemist. The first thing to ask about is the size of the study. Were there enough samples used? They often do not give this information to the sales person but it is always worth asking. A study in which one sample was compared to one other sample is much less impressive than one in which multiple samples were compared. Ideally, at least 30 runs or samples should be done to support a claim. For you to be interested in a raw material however, the study should have been run at least two or three times.

Was it compared to a control?

One of the most frequent problems I see with cosmetic raw material marketing is that they present data of a material compared to no control or to a water control. For example, they’ll claim the ingredient is moisturizing then show you data of the subject done with and without treatment. This might be fine for commercials and products directed towards consumers but for scientists this isn’t good enough. At the very least you should ask for data of the product compared to a placebo control. It’s great if you can get a formula compared with and without the raw material. But perhaps the best thing is when you can see a material as compared to the best material out there. Raw material suppliers love to compare their product to no control or a placebo control. However, what you really want to know is how does the raw material compare to the best technology out there for solving the problem you are trying to solve.

Was the study done by an independent lab?

While you should expect that all the data presented to you by a supplier is biased (they are trying to sell you something after all) some data is more biased than others. The best studies are the ones that are produced for the supplier by independent labs. Presumably, the independent lab will be paid no matter what the results of the study so they are not inclined to skew the data in a specific direction. When you see truly data produced by a truly independent lab, you should take more notice of that raw material. Although, it’s worth pointing out that just because you are seeing positive data and it came from an independent lab, that doesn’t mean it isn’t without bias. The raw material supplier wouldn’t show negative data if there was any, so always remember no matter what data you get from a supplier about their raw material, it is likely biased.

Will it make a meaningful impact on your formulation?

The most important thing to look for when trying to find new raw materials is whether something will have a significant impact on your formula or not. The best ingredient choices will have an impact that your consumer will notice. The second best ones are ingredients that can save you money. Finally, some ingredients can provide you a new story for your formula that can help boost sales. But if the new ingredient can’t do any of these or can’t be a reliable secondary supplier, then there is no need to look at the ingredient any further.

Although we are scientists, we are not immune to the power of marketing. If you maintain a healthy level of skepticism and objectivity, you’ll be able to avoid being fooled and still find the new raw materials that will help you make the best cosmetic products possible.