Last fall I did a talk for the Joint Forensic Association meeting in Orlando. It 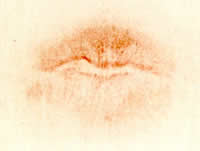 was a lot of fun talking to forensic scientists about cosmetics. I did a modified version of my Beginning Cosmetic Chemistry course which focused less on formulating and more on the composition of cosmetics.

What I found most interesting was the way that forensic scientists use cosmetics as evidence in crimes.  Here are some examples.

You probably know forensic scientists use fingerprints for solving crimes, but did you know they can use lipstick prints and smears as well? By comparing the composition of a lipstick smear with that of a victim, forensic scientists can demonstrate indirect proof of contact or a relationship between victim and suspect. Also, it is sometimes possible to extract saliva DNA from the print. See this article published in the April 2002 issue of Forensic Science Communications a paper on how they do it.

Idea: Could lipstick manufacturers add an ingredient to their cosmetics that would help forensic scientists better identify prints?

Like lipstick smears, make-up foundation can easily be transferred to clothing or other surfaces just through contact. Forensic scientists can discriminate between different types by using FTIR, SEM-EDX and GC-FID analysis. According to this paper in the Journal of Forensic Sciences, they can get up to 99.7% accuracy.

Idea: Could cosmetic scientists modify their formulas to help make identification even easier without impacting performance?

Although it is thought to be a myth that your hair gets “used to” a certain shampoo, there is some evidence that components from your shampoo will accumulate in your hair. Using HPLC, forensic scientists have found that they can determine the type of shampoo that may have been used on a hair sample. The technique requires only a 5 to 10 cm single hair and is non-destructive.

Forensic scientists can use hair to determine whether a person has been taking illicit drugs. It’s really quite amazing what kind of things get trapped in your hair. They analyze samples using GC-MS and can detect codeine, morphine, cocaine, and opiates. Bleaching, perms and other hair treatments were found to significantly reduce the detectable amount of many of these compounds.

While thinking about the intersection between forensics and cosmetic science, it occurred to me that this could be a rich area for new product ideas. The idea of putting something in your cosmetic formula to make it easier to identify seems like a pretty good one. In addition to helping law enforcement, it could also help stop product counterfeiters.

Think about your own products. How could you change them to make them more useful for forensic scientists?