I read this article about French lavender farmers who are outraged by EU regulations that will require manufacturers who use lavender oil to put a warning label on their product. Some of them are even threatening to switch to a different crop. 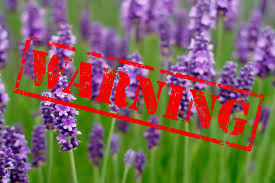 According to the lavender growers they shouldn’t be required to comply with these regulations because their ingredient “…is not a chemical and allergies only tend to produce rashes.” The argument that they are not selling chemicals is wrong. Lavender oil is a mixture of chemicals and some component of those chemicals causes allergic reactions in a large number of people. Just because something is natural does not mean it is not a chemical.

And the defense that “…allergies only tend to produce rashes” hardly seems like a defense at all. Even if they did only produce rashes wouldn’t a consumer want to know that? Isn’t the entire purpose of these warning labels is to let consumers know that they may expect some negative reaction to using a product?

In the case of a rash that is an immediate effect that I think most consumers would want to avoid. When a product is labeled as “potential carcinogen” there typically is no immediate effect. In truth, there is probably no noticeable effect at all. When things are labeled with warnings like “potential carcinogen” that doesn’t mean there is proof that using the product with the ingredient in it will cause cancer. If anyone could prove that using an ingredient in a cosmetic would cause cancer no one would be able to use that ingredient. It’s just very difficult to prove a definitive connection between an ingredient and cancer.

Labeling products that may cause allergic reactions in people is exactly the type of labeling that should be done. When there is a clear effect consumers have a right to know. Now, I don’t necessarily agree that there should be some additional warning label as long as you list the ingredient on your LOI, but this should be true of any cosmetic ingredient. If it is legal to use the ingredient in producing a cosmetic, you shouldn’t have to warn people that you are using it. If you have to have a warning that the product is somehow dangerous it shouldn’t be allowed in the formula in the first place.

Perry has been formulating cosmetic products and inventing solutions to solve consumer problems since the early 1990’s. Additionally, he has written and edited numerous articles and books, taught continuing education classes for industry scientists, and developed successful websites. His latest book is Beginning Cosmetic Chemistry 3rd Edition published by Allured.