One of the fun aspects of what I do for a living is that I occasionally get invited to be a guest on TV shows.  Recently, I recorded a spot on the Dr Oz show which is filmed in New York.  You can see the video clip here. 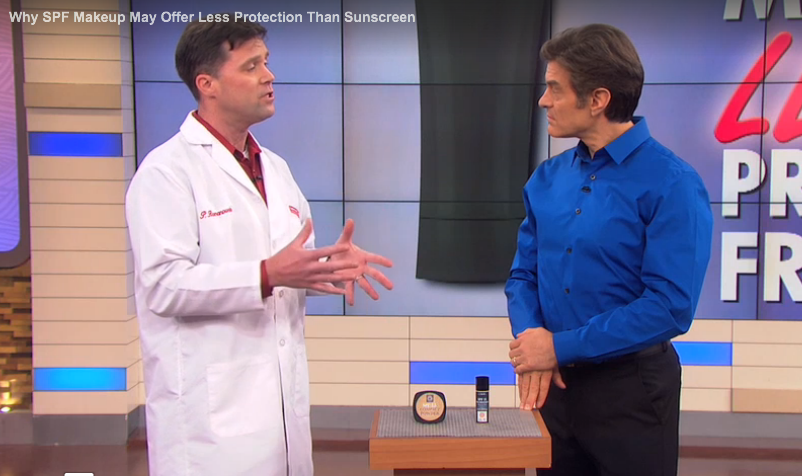 You might be curious about the whole process so I thought I would explain what happens.

The first time I was invited on the show, it was arranged by my book publisher, Harlequin.  We had just published our book “Can You Get Hooked on Lip Balm” and they sent me on a media tour.  In addition to the Dr Oz show I was also on a number of local news programs and on the Rachel Ray show.  Before doing all these tv appearances they also sent me through a day of media training which was very helpful.  If you want to appear on TV or in the media, I would suggest you do some type of media training.

Since the first appearance went well the Dr Oz show invited me out a few more times.  This latest time is the 4th time I’ve been on the show.  Now they contact me directly and usually it’s whenever they have some type of new story angle that involves cosmetic product mythbusting.  If I was a bit more ambitious I suppose I could pitch stories to them but I don’t look at TV appearances as anything but fun opportunities. That’s probably a mistake by me but oh well.

Preparing for the segment

When the producers contact you, it’s usually through email.  They first want to see if you are available.  Then they talk to you on the phone about the segment and what they want to cover.  You have some input here but a lot of times they have specific things they want to talk about.  In the segment above I can’t remember but I think I suggested the body wash micro beads piece.  They had ideas about the sunscreen and argan oil.  Of course, I helped flesh out the ideas with the basic facts and that eventually got turned into the segment we recorded.

I don’t get paid to be on the show but they do cover any traveling expenses.  For this segment I just happened to be in New York so they covered my car ride to and from the studio.  It’s a pretty nice studio by the way.  They used to film across the hall from the Jimmy Fallon show but they have since moved uptown.

The day of taping

They don’t tell you what to wear although they did ask me to bring my lab coat.  I’ve gotten a lot of use out of that lab coat outside of the lab.  I try to wear a collared, solid color shirt, staying away from stripes, and some black pants, business casual.  They fix your hair up a bit and put on some makeup to smooth your face and remove some of the oiliness.

You get put in a waiting room where the producer goes over the “script” with you.  You don’t memorize what to say and they don’t tell you what you have to say, but there are certain key phrases they would like you to include.  It helps make the segment flow more smoothly.  I figure this is done to help prepare you for the pressure of all the attention being on you.  Most of his guests are not frequently in front of an audience like this and it’s pretty easy to freeze up or stumble over your words.  After doing appearances on TV I have much more sympathy for politicians who get up in front of an audience and say stupid things.  It’s really easy to say something stupid under such circumstances.

After you’ve run through the script a few times they take you out to the stage to do a quick run through with how the segment will go.  This helps the camera men and prop people prepare.  Those stations you see set up get adjusted if needed.  You also get to say hello to Dr Oz (who’s a very nice guy by the way) and walk through how the segment will go.   You don’t really talk as they prefer to keep everything as spontaneous as they can. It takes only about 10 or 15 minutes but that is mostly just waiting for your turn.

In the green room

When the rehearsal is done they send you to hair and makeup to get made pretty and then back to your room where you wait.  The producer will come in and go over the script with you one or two more times.  When I was alone I also spent time running through the script in my mind.  The more you rehearse it the less likely you are to stumble over your words.

The first time I was on the show I had people from the publishing company with me in the green room but in subsequent appearances I’ve been alone.  There’s not much to do while you wait except run through the script, eat food from the veggie tray in your room, drink water, tea, or coffee, and watch the tv monitor to see what’s going on with the show.  I was probably waiting about 90 minutes prior to going on the show.

Appearing on the show

When it’s time to tape your segment the producer walks you from the green room to the backstage area.  The sound people hook you up with a microphone and you get led to the entrance of the stage.  Between segments there is a comedian who keeps the studio audience entertained and energized.  There is probably another 5 or 10 minute wait until they call you on.

My segment taped first so they positioned me at the prop stand and I waited for Dr Oz to do an intro to the segment.  This was the first time I saw the video of me being introduced as a “world renown cosmetic chemist.”  I like that.

Then we taped the segment.  Fortunately, I didn’t screw up or ramble so it went off pretty well this time.  They did do some editing but mostly I was happy with how it turned out.  In truth, it’s cringing for me to watch myself on TV so usually I don’t.  It’s a little embarrassing.  Still, it’s also fun for me and I’m happy to be getting the message out about cosmetic science to millions of viewers.

After you tape your segment you walk off-stage, get your microphone removed and you’re pretty much done.  The producer tells you you did a great job (whether you did or not) and they take you back to the green room to get your stuff.  If you want to stick around and catch the rest of the show you can but I didn’t.  I had to get back to the airport to fly home.

Overall, it was a positive experience for me.  I know some people will criticize me for appearing on the Dr Oz show since much of the stuff on his show is of dubious scientific validity.  In fact, one study suggested like 53% of his advice is wrong.  I definitely have mixed feelings about it.  However, I figure as long as I’m in the 47% of information that is correct and true and that I can help people learn more about their cosmetics, plus get the notion that being a scientist isn’t all about being nerdy, I’ll continue to do the show.  Besides my mom & dad like to see me on TV.